FulpTube was a social media project that was created by chief bazinga as a hobby. FulpTube was an attempt at recreating the YouTube 2013 Layout (before switching to Cosmic Panda), and used to also recreate the 2010 and 2009 layouts. It was one of the biggest old YouTube sites out there, and the very first site to recreate annotations (despite the editor itself being so hard to find that people thought it had been removed). Development started on November 14th, 2020 as a result of other old YouTube clones being shut down.

FulpTube shut down due to someone getting into the database and threatening to leak it on June 25th, 2021, but was very soon succeeded by SubRocks.

It was created by chief bazinga/bhief cazinga, a computer programmer who has had experience working on their own full-stack web projects Spacemy, Witter (clones of old Myspace and Twitter respectively), and a few other projects not listed here, since 2018. FulpTube has been the most popular and most long-going site Bazinga has worked on to date.

The original FulpTube server (fulptube.rocks) was an old Dell Inspiron with an AMD A8-8600P Radeon R6 4C+6G (4) @ 1.6GHz & 8GB of RAM, running Ubuntu, making it cost nothing to host besides electricity and internet bills.

Later in FulpTube's life, Bazinga moved the site to an unspecified VPS and the domain 'fulptube.net'. (which now redirects to 'upload.systems', a ShareX file upload service?????)

Videos uploaded to FulpTube were compressed to 720p, 2.5mbps. The site supported practically any format you gave it, PNGs, GIFs, M4Vs, MP4s, MOVs, MPGs, AVIs, WMVs, and much more, because it was powered by FFmpeg.

Channels could've been customized as the ways listed in the Features area.

This site is not professional. There are bound to be bugs since it's being worked on by only 1 person most of the time.

The site had inaccuracies due to pages not being archived and Bazinga not being great at HTML and CSS stuff.

There was a 100 MB upload limit due to CloudFlare, until Bazinga moved to the VPS service that ran fulptube.net.

On April 15th, 2021. FulpTube's official Discord server was raided by BMF, whom tricked goom into adding a bot to the server that allowed him to easily ban everyone (except for members with roles that are higher than the bot one) and would shortly sent a DM message notifying them of said action taking place.

The damage left behind by the raider: https://fulptube.net/watch?v=MTYxODQ3ODUxMjc=55 (DEAD LINK)

On June 11th, 2021. One of the Administrators for FulpTube (known as tsukumizu) would ping all members in the site's official discord server where he would (jokingly) announce that FulpTube would be turned into a white ethnostate, and that anybody wasn't 95 percent white and up would have their accounts banned.

It was shortly after this, Chief Bazinga, knowing that it would further taint the site's reputation would ban Tsukumizu immediately. And for a while, it seemed to have been the end of that. But little did he know, Tsukumizu still had access to the website. And began to ban people (including other staff members in retaliation).

On June 25, 2021 a former staff named "brenden" threatened to leak the user database. This caused the site to be shut down and the discord server to be deleted. The main FulpTube URL now redirects to the FBI page, and other links lead to a text announcing the shutdown 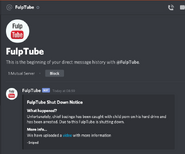 FulpTube's bot turns against its owners. 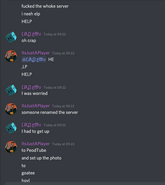 A desperate call for help.

ItsJustAPlayer trying to figure out what happened.

Where the June raid begins. 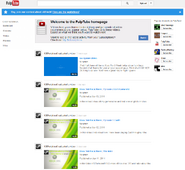 Who ran the site

Community content is available under CC-BY-SA unless otherwise noted.
Advertisement